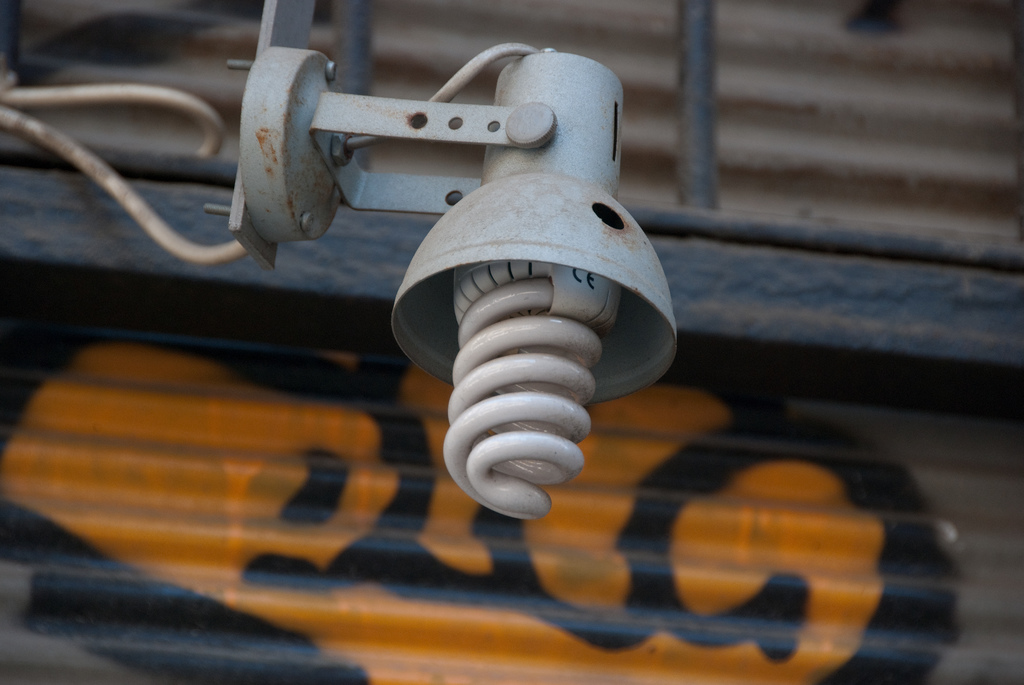 We’ve all seen these funny-looking, squiggly light bulbs – the compact fluorescent bulb (CFLs). You either love them or you hate them. I’m not their fan. Like fluorescent tubes, they are prone to flicker. And that flicker has been known to trigger a migraine for me.

But they’re also a potential problem for everyone, because they contain mercury. And mercury is toxic. It’s not an issue unless you break one. The EPA has specific, detailed, scary guidelines for what to do if you break one. Step one is to evacuate the room. Especially children, because it is especially harmful for growing bodies. You may want to read up on the procedures.

While researching this post, some sites said that the amount of mercury was miniscule – at about 4 mgs per bulb. I’m not so sure I would call that miniscule.

When you read the label for CFLs, you’ll also find that you should not put them in the trash. Doing so puts mercury in our landfills. Instead you should recycle them. Earth911.com has information on where you can take your burned out CFLs.

Not all CFLs are created equal. The Environmental Working Group (EWG) has a shopping guide for CFLs.

Can You Avoid Buying CFLs?

The incandescent light bulb is said to be an energy waster, hence the government mandated phase-out of the incandescent bulb. But the CFL isn’t popular for a number of reasons: the flicker, the unnatural colors, and the fact that it contains mercury. It would have served us all better to research various options rather than mandating the first different bulb that came along.

Originally, the phase-out was to start in January of 2012 with the 100 Watt incandescent being replaced with a CFL equivalent. A budget issue in Congress caused a delay until after September 30, 2012. That date is fast approaching and I’ve not been able to find information on the current status.

Suffice it to say that, with the current law, you will eventually find fewer and fewer incandescent light bulbs.

What About Fluorescent Tubes?

Thinking about the CFL got me to wondering about the fluorescent tubes that have been around forever. Are they toxic? Do they contain mercury? Should they be recycled? Perhaps they haven’t been discussed because they are not as prevalent as the CFL promises to be. But the answer is “Yes.” The fluorescent tube also contains mercury and so, I assume, it should also be recycled.

While researching for this post, I found that there is a potential fire hazard associated with the CFLs. This information comes from a PDF on CFL safety issued by the San Francisco Fire Department. Here’s some things you should be aware of:

What are your thoughts about CFLs? Love them? Hate them? Fear them?