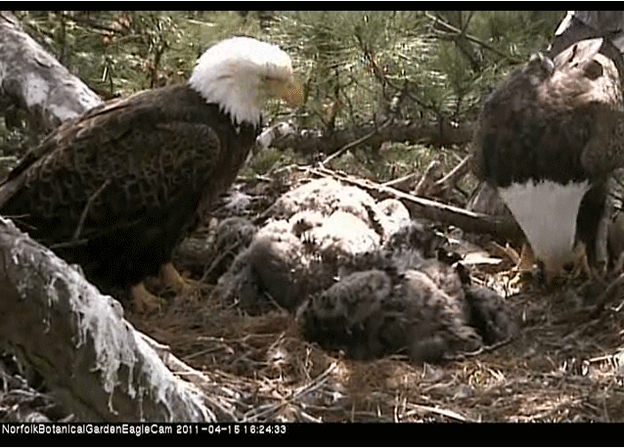 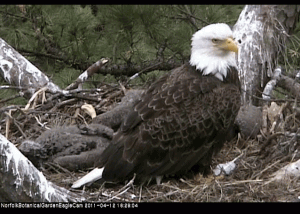 A friend of mine introduced me to this Bald Eagle Cam back in March. It is a web cam of a family of eagles – two adults and 3 young eaglets – living in nest 80-90 feet off the ground in a Loblolly pine at the Norfolk Botanical Gardens.

Sometimes, being healthy is about taking mental breaks & relaxing. The Eagle Cam has been my mental break lately. I’ve grown to love that eagle family and have found lessons that can apply to all of us: 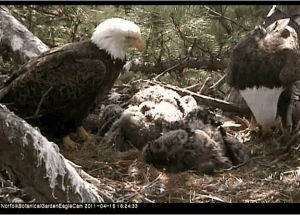 Even though the eaglets have moved, there is still a web cam at the WVEC site where you can follow their progress.

The bald eagle (Haliaeetus leucocephalus) is our nation’s emblem and is the only eagle unique to North America. According to the American Bald Eagle Information site:

The bald eagle’s scientific name signifies a sea (halo) eagle (aeetos) with a white (leukos) head. At one time, the word “bald” meant “white,” not hairless.

I’ll be watching these eaglets until they leave WCV. I have been fascinated with watching them grow and learn. Amazing how much they grow in such a short period of time. They weighed approximately 2.5 ounces when they hatched. The oldest of the 3 eaglets is 2 months old today and weighed 9.5 pounds on Tuesday!

The decision to remove the eaglets from their nest at the Norfolk Botanical Gardens was made by the Virginia Department of Game & Inland Fisheries (DGIF). While there were people who felt that man shouldn’t interfere with nature in that manner, the decision was made because it would be in the best interest of the dad and the three eaglets. You can read more about that in this press release (PDF).