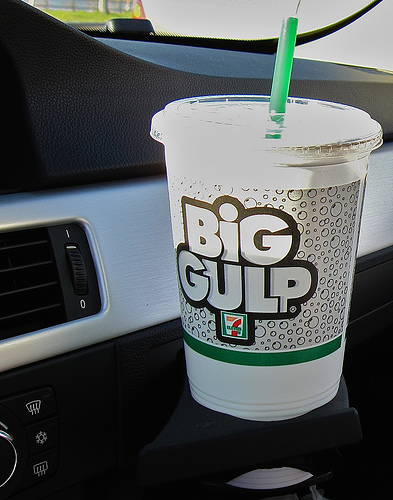 You’re probably aware that, in a (misguided) effort to curb obesity in New York City, Mayor Michael Bloomberg has called for a law to limit soda size to 16 ounces. He did this on Thursday, May 31st, 2012. The next day, he helped celebrate National Donut Day!

As a Natural Health Coach, many expect that I would agree with Mayor Bloomberg on this issue, right? Actually, my opposition has little to do with “sugary sodas.” I grew up on sodas, in a time and place where they were sweetened with sugar instead of high fructose corn syrup. But I very rarely drink them today.

Full disclosure: I had one just last week, but it was the first one I had this year. At the time, I had a migraine and somehow my head said that a coke would help. As it happened, there was one, and only one, remaining in our refrigerator. From some we probably bought in 2010! If it hadn’t been there, I would have simply told my head, “No!”

I do think that, as a nation, we consume far too much sugar in all of its various forms. Including sodas. And donuts. And I personally have seriously reduced the amount of sugar I consume.

But its a personal choice. And educating people as to WHY they should limit sugar (there are very good reasons!) can be far more effective than another law. Because we are often like children. If you tell us NO, then we want it more.

Aside: I get that attitude from a friend when I consume a hamburger. She delights in the fact that I’m not eating healthy. It’s kinda like smokers. When one quits, the others will delight in any backsliding by the quitter. Know what I mean?

But, again, I digress.

Here’s the real reason I am against Mayor Bloomberg’s ban:

I’m a control freak. I like to be the one in control of my own body and the food that I put into it. I don’t want anyone telling me what I can and cannot eat. And that’s where this is heading.

Actually, it already started with his ban on trans fat.

After sugar, what is next? Will he ban butter? Whole milk? Eggs? Pizza? Hamburgers? Soon we will have the government telling us exactly what we should eat. They frequently get the facts wrong on what really is good for us to eat anyway. So why do we want them telling us what to eat?

But more importantly: Where will it end? Trans fat? Salt? Sugar? Butter? Meat?